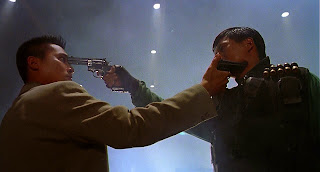 Can you have power without a state? Sure you can.

You can exercise that power, too. A fistfight between individuals doesn't have to be an act of political domination, if it is still political--being concerned with power. That said, fistfights between individuals cannot be ruled out as acts of political domination, for it is likely that the first wars were between small groups of individuals, with little more than their fists and perhaps some sharpened stones or bits of bone.

How much, I wonder, does it require? What are the necessary and sufficient conditions to form a state?

The excellent Mr. Crow explains that the state "has to [be] identified by its form." And all this builds on his terrific post, which I will quote in part now:

The State - and let's just flash back to Kropotkin - exists to protect property and to kill, hurt, maim and break the ruled classes who must not be allowed control of that property. The state exists to control populations so that class which controls the state can have its preferred forms of property. No matter how many times men have tried to capture it and use it towards a different end, the state returns again and again to its stable form of power, and its stable function.

Mr. Crow takes a moment to worthily lambast liberals' historical myths, and invoke the fury which used to be associated with anarchism, before punk rock and scrawling on high school lockers became the near-whole of anarchist expression.

If I had a nickel for every time I heard a progressive prattle on about the American Dream, I'd have enough money to arm a whole army of Lucy Parson's grifters, grimers and tramps. Oh, happy day...

And there is my historical disagreement with Jack Crow, in that I do not see a power capable of dislodging the state that will not become a state. I do not assume that he believes the grifters, grimers, and tramps will simply abandon power and return, like Cincinnatus, to their well-defended homes and livelihoods, but I do wonder what he imagines would follow. For the record, Cincinnatus would have re-emerged the moment his class' power was threatened again, like Sulla; power won cannot be yielded except in the case of a challenge unanswered, but now I'm losing my track and will return to my point.

None of this is to say that Crow, or I, or anyone, needs to say what will follow. None of this is to say that the potential for power wrested means a group or an individual should never make the attempt. But how can we be blind to the state within us, to the oppression that is not merely a foreign contaminant to avoid but inherent in every socially organized exercise of power?

Mr. Crow does me a great favor by posting a scenario to consider.

Let's assume for a moment that someone you love is badly injured or sickened by a negligent party; that the person in question, in the process of dumping benzene into your local swimming hole, poisons a family member of yours.

You decide to seek recompense from this person and collect several friends to help you in your task. You visit his place of residence, persuade him to understand the gravity of his predicament and the unlikelihood of escaping it and then suggest a number of remedies, up to and including providing support for your sickened kin until such time as her illness passes, if ever.

Have you formed a "state" to achieve these ends, or does a state have to meet more criteria than just "organizing to seek redress"?

Organizing to seek redress is different from organizing to impose redress, should it come to it. You can see in this a one-off deal, an ad-hoc "kinetic neighborhood action," or you can see it as probably an apt description of but one way that humanity fell into the morass that "law and order," "crime and punishment" has become.

Because what law, in a stateless world, forbids poisoning water? Personal law. Here's where I do not differ with Mr. Crow; I would likely do exactly what he details here. I want to emphasize that. I do not think his described action is reprehensible in any way. In fact, it sounds noble. Only too noble. But it is no less political. It is no less an act of aggression. Perhaps to counter wrong. Perhaps to counter the excessive power of others. But it is not light versus dark, because there is no light. There is no dark. There is no morality but what we say there is. And when it comes down to it, the poisoner can say "I didn't make your little girl swim." "I didn't pour it down her throat."

And what do you say to that? "You permitted the circumstances to exist?" What responsibility does anyone have under this circumstance?

The issue here is not what the state is and what we are in opposition to it. The state is merely the most powerful entity around. If it dissolved, another would form and reflect the characteristics of those who steer it. Some are short-lived, and some live long.

But I recognize a dynamic when I see it, and this use of force, this assertion of principle, this claim of responsibility, this demand of recompense, this challenge of power against power... Let us call it what it is. It is rule. Perhaps a more familiar exercise, a more understandable one, but it is the compulsion of others to follow one's will. It is the positing of a maxim, the threat of future reprisals of this sort. Does that make it evil? That's another question.